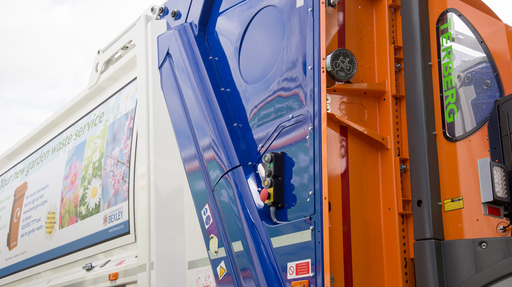 Serco is equipping its entire fleet of waste and recycling vehicles across London with cutting edge cyclist safety technology in support of the Safer London Lorry Scheme, which comes into force on 1 September.

There have been 8 cyclist deaths in the Capital this year and 7 of those involved collisions with HGV’s.  One of the world’s leading public service providers, Serco, operates over 117 Heavy Goods Vehicles (HGVs) in the form of Refuse Collection Vehicles (RCV’s) inside the M25 on behalf of Bexley, Wandsworth, Hammersmith & Fulham, Havering and Newham boroughs.  In Spring 2014, the company announced its decision to adopt the Cyclear cyclist warning display system after successfully trialling the system in Wandsworth, and then installing the equipment to 23 RCVs in the London Borough of Havering.

Cyclear was developed in the UK by vehicle safety technology company Innovative Safety Systems Ltd (ISS) and comprises an illuminated sign and speaker to alert cyclists and vulnerable road users when the vehicle is turning left.  The system has an optional sequencing sensor feature, which notifies drivers when a cyclist or pedestrian is approaching.

Philip Quelch, National Fleet & Plant Manager, Serco said: “We were looking for the right technology and the feedback from our crews about Cyclear has been extremely positive. ISS has developed this technology specifically for waste and recycling vehicles and the quality of the technology is superb. We are confident the Cyclear makes our vehicles safer and helps to prevent accidents with vulnerable road users.”

The rollout across London involves installing the system to 35 new RCVs being delivered in August for Bexley and Hammersmith & Fulham and 4 arboriculture vehicles in Newham. A further 14 existing vehicles in Bexley and 28 in Wandsworth will be retro-fitted with Cyclear and the 23 RCVs in Havering will be fitted with additional ISS sensors to work in conjunction with Cyclear. Bexley is also installing the RX3 CCTV camera system from ISS to the new RCV’s along with LANlink WiFi technology that automatically downloads recorded footage when the vehicles return to depot, and sends a daily health check about the camera system

Gavin Thoday, Director, ISS said: “Serco’s road testing and adoption of Cyclear has been crucial in demonstrating how effective the technology is in an operational environment, in a busy urban setting.  One of our challenges was to eliminate the false alarming that has proven to be a common problem with other systems.  The Cyclear sensors can distinguish between the usual stationary objects at the side of the road such as signposts and buildings and a vulnerable road user such as a Cyclist.  It only sounds an alarm for the driver when an object approaches from the back of the vehicle towards the front.”

Philip added: “ We would be keen to introduce this technology in other urban areas where we operate outside of London subject to the success and outcome of the London installations.”

One of Serco’s Havering fleet was recently showcased at the City of London Cycle Awareness Day held at Guildhall.