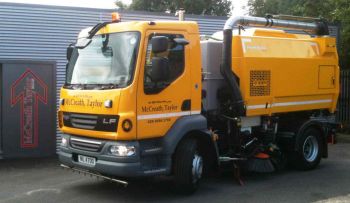 All Systems Go For ISS In Northern Ireland

Based in Lisburn, McCreath Taylor is headed up by David and Peter Johnston who have over 80 years experience in the waste management business in Northern Ireland and work with the majority of local councils there.

Gavin Thoday, Director ISS said: “We are delighted to have McCreath Taylor on board as our agents in Northern Ireland. They are an impressive organisation with the expertise and infrastructure to supply, install and service all our products.”

A one-stop shop for vehicle safety technology ISS provides the full range of safety and lighting products such as reversing radars, CCTV camera systems, Hard Disk Recording, warning beacons and LED lighting packages. The company recently launched *Cyclear®, a new and effective Cyclist Warning Safety Device, which is being readily adopted by local authorities and private waste contractors across the UK, and is now available in Northern Ireland via McCreath Taylor.

ISS RX3 DVR Hard Disk Recording equipment was installed to a Scarab sweeper for Derry Council last August, the first authority in Northern Ireland to use the technology. Since then McCreath Taylor has fitted the equipment to the authority’s new fleet of 8 sweepers, comprising two 15 tonne Scarab Magnums on a DAF chassis and six 12 tonne Scarab merlin road sweepers, also on a DAF chassis.

David Johnston, Managing Director, McCreath Taylor said: “There is an every increasing demand for this kind of equipment to be fitted to sweepers to assist councils in verifying claims made for damages reportedly caused during sweeping operations and for investigating claims against the service. In our opinion ISS products are the best in the market place. We are very pleased to be their agent in Northern Ireland and to be able to provide our customers with such high quality technology.”

McCreath Taylor has also gone on to fit the RX3 DVR camera system to every sweeper it has supplied to councils in Banbridge, Craigavon, Ballamoney and Armagh, as well as its own demonstration vehicle and CP Davidson refuse collection vehicles for Dungannon & South Tyrone Council.