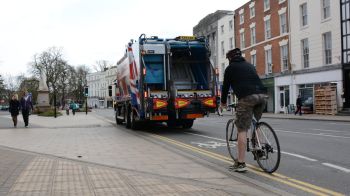 Cyclear ™ enhances the safety and wellbeing of vulnerable road users, drivers and vehicle operators by preventing accidents and fatalities. The system has been designed, manufactured and tested in the UK by Innovative Safety Systems Ltd (ISS), a leading provider of vehicle safety equipment.

Cyclear is being demonstrated on the ISS Stand (5X100-Y111) at the Resource Efficiency & Waste Management Solutions Show at the NEC (16-18 September 2014).

A 3-stage system, Cyclear works by: 1) preventing cyclists from travelling down the side of vehicles when they are turning left via a sign that illuminates when the vehicle is indicating left; 2) warning cyclists again with an audible warning announced through a speaker on the vehicle; and 3) by detecting when a cyclist is travelling from the rear to the front of the vehicle (undertaking) and alerting the driver inside the cab with an audible warning.

Gavin Thoday, Director, ISS said: “Cyclear is different because we have virtually eliminated the false alarming that has made other similar products ineffective. The sensors are designed to filter out street furniture, parked cars and other static objects and they only alert the driver when an object is moving from the rear to the front of the vehicle.”

Another great feature of Cyclear is that vehicle operators can choose whether to use either the illuminated sign or the sensor or both depending on specific requirements and budget.

Four years in development, and following successful tests of the prototype, Cyclear has been adopted by a number of authorities including Guildford Borough Council and the London Borough of Sutton. From Autumn 2014 Serco is fitting Cyclear technology to all waste vehicles in the London Borough of Havering.

Paul Wells, Fleet & Waste Operations Manager, Guildford Borough Council said: “We take health and safety very seriously, which is why all our refuse and recycling vehicles are fitted with the latest digital CCTV recording technology, radars and ‘Caution Workers’ light-boards. When ISS approached us with Cyclear we had already recognised the need to take steps to keep cyclists safe. We were waiting for the right technology and we are confident that Cyclear is a great solution. Our drivers are reassured knowing they have something in place to help prevent accidents.”

Cyclist safety campaigner and Chair of RoadPeace, Cynthia Barlow, has also had a demonstration of the system and has given it her full backing: “ISS has put a great deal of effort and engineering expertise into creating a safety system that is effective for both cyclists and vehicle operators. If used more widely, this system could really help to reduce the number of cyclist and pedestrian fatalities in our towns and cities.”

A one-stop shop for vehicle safety technology ISS will also be demonstrating the LANlink remote download facility, which saves vehicle operators time by downloading recorded camera footage from vehicles by wifi as soon as they return to the depot. The system also sends an automatic daily health report for each camera and recording device alerting the operator of any faults immediately. The company also supplies, installs and maintains the full range of safety and lighting products including reversing radars, CCTV camera systems, Hard Disk Recording, warning beacons and LED lighting packages.

ISS has seen impressive growth over the past 12 months and has recently relocated to larger, fit for purpose premises, featuring a state of the art showroom to demonstrate its market leading technology, and providing excellent meeting facilities for its customers.