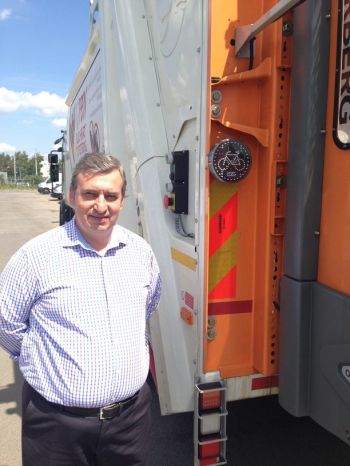 The Authority is one of the first in the country to adopt the Cyclear warning system developed by vehicle safety technology company Innovative Safety Systems Ltd (ISS). The system comprises an illuminated sign and speaker to alert cyclists and vulnerable road users when a vehicle is turning left. The latest version also has an optional sequencing sensor, which alerts the driver when a cyclist or pedestrian is approaching. Vehicle operators can use one or both elements of Cyclear installed on their fleet depending on specific requirements and budget.

Barry Perkins, Fleet Operations Manager, London Borough of Sutton said: “The crews welcomed the Cyclear technology because they are reassured that vulnerable road users such as cyclists are more protected. We are extremely lucky in this Borough that we haven’t had any accidents between our vehicles and members of the public, but it’s better to be safe than sorry.”

Continued Barry: “The cameras mean that the drivers are being more careful and the crew feel more protected if there is an incident or accident. If members of the public are abusive to the crew, which happens quite regularly, they are reassured to know that such behaviour is being recorded. If any complaints are made against crew members we can get to the bottom of the situation quickly.”

Continued Barry: “We signed up to London Cycling Campaign’s ‘Safer Lorries, Safer Cycling’ pledge and we have taken every possible step to ensure that we are protecting vulnerable road users. Cyclear is the best system we have come across.”

Gavin Thoday, Director, ISS said: “We have invested a lot of time and resources into developing Cyclear specifically for this purpose. The feedback from customers who have adopted the technology on their fleets is extremely positive. Some have reported a marked change in the behaviour of cyclists who are much more cautious when approaching the vehicle when it is manoeuvring left. The system requires little to no maintenance and we fully expect Cyclear to become standard kit on refuse vehicles across London as well as other cities where there is a need.”

Cyclear has already been fitted to 10 of the Authority’s 19 refuse and recycling vehicles and it is planned to fit the remaining 9 in the future. As part of its commitment to protecting the public, London Borough of Sutton has also fitted safety bars to all of its refuse and recycling collection vehicles.